The presentation centers around a new sculpture by Nicole Eisenman that is directly related to her ambitious installation on the terrace of the Whitney Museum of American Art as part of the 2019 Whitney Biennial. The sculpture comprises of a nearly 28 foot-long fiberglass flagpole that is broken and lays tipped over across the floor. Next to the collapsed pole sits a baby eagle splayed in a cardboard box as if fallen from its usual post at the top of the flagpole, its legs broken from the fall. This work, a poignant and heart-wrenching commentary on the national political climate, serves as a galvanizing force for other works in the exhibition. Expressing a mounting sense of alarm and dissatisfaction with the current status quo, the artists in this exhibition tackle major issues from various viewpoints yet are joined in a sense of urgency and desire for change.

Edgar Arceneaux’s work is a storage cabinet of law books which have been deemed obsolete. The work extends the formal and conceptual concerns of his major sculpture Library of Black Lies in which Arceneaux brings new purpose to books deemed antiquated, encasing them in crystalized sugar which continue to grow over time. Through repurposing the books, Arceneaux raises concerns regarding a long history of literature that purports authoritative and often exclusionary narratives.

Rodney McMillian’s large-scale carpet painting pulls the carpet, which normally occupies a horizontal, sculptural position on the floor, up onto the wall transforming what was once a mundane floor-covering into a painting. This gesture reflects on the value of commodities across socioeconomic lines and simultaneously engages in a critique of the history of monochromatic painting.

Arlene Shechet’s sculpture in ceramic and wood combines hard edges with amorphous organic gestures. Atop the black and white pedestal rests a dark mass that twists and turns as if balancing on itself. The juxtaposition between hard and soft forms, rigid and primordial, demonstrates Shechet’s interest in fusing and confusing distinctions between inside and outside, sculpture and base, surface and support.

Wangechi Mutu’s hybrid human-animal figure speaks to the particular conditions of the female body in relationship to colonialism and proposes identity as a constantly transforming rather than fixed construct. Rejecting a singular place of origin, Mutu’s figures are drawn from myth and folklore and are composed of imagery of plants, machines, pornography, animals, and medical illustrations.

Ruben Ochoa’s sculpture and photographs hone in on aspects of the everyday urban environment of Los Angeles and address architecturally enforced mechanisms of cultural separation concerning the intersections of race, class, and environment. Using materials usually associated with construction, Ochoa probes the physical and conceptual possibilities of such mundane materials, highlighting their otherwise unnoticed political charge.

Hugo McCloud’s work is concerned with issues of inequities resulting from patterns of global distribution specifically in terms of the cycle of materials. His bronze paintings use a material commonly used in both sculpture and functional objects such as electronics and plumbing to collapse the boundaries between the worlds of art and labor.

Liz Glynn’s works express grave concerns with the state of our environment and our immediate survival in an age of climate crisis. The stainless-steel casts of tree bark, which appear as both a natural material and technological device, are related to her forthcoming major installation for the San Francisco International Airport.

Mary Kelly’s lightbox addresses the current escalating issues of the environmental crisis and human survival. Drawn from her deep research into Cold War-era activism, Kelly’s work nods specifically to the protests and interventions of the Women Strike for Peace, which worked to demonstrate against nuclear testing and the more contemporary actions of groups like Code Pink, who similarly intersect in their interest in anti-war and feminist activism.

Vielmetter Los Angeles is located at 1700 S Santa Fe Ave in downtown Los Angeles. Gallery Hours are Tuesday through Saturday from 10 am - 6 pm and by appointment. 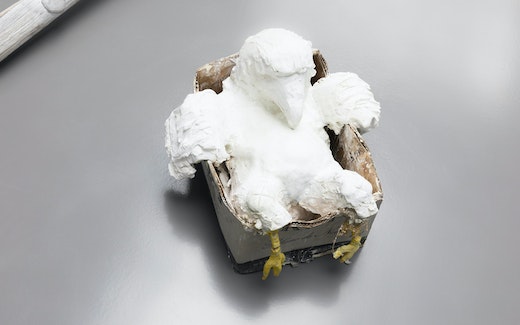