Vielmetter Los Angeles is pleased to announce Genevieve Gaignard’s newest body of work, “Look At Them Look At Us,” an exhibition of sculpture, mixed media and photographic self-portraiture, that deftly mixes the personal with the universal to arrive at unique truths about race, class, femininity and the art market itself. The series will be featured in a solo booth at Frieze Los Angeles, February 14-16.

Since 2015, Gaignard has garnered critical acclaim for her ability to dissect and reassemble culturally entrenched stereotypes, often using her body as a canvas to represent complex notions about the opaque nature of existence.

“Look At Them Look At Us” represents her most complex and compelling examination of race to date. Poetic declarations in neon, stacked luggage and collage works that mix historically racist images with whitebread commercialism, ask viewers to look within in search of their own misguided notions about race. The new work also delves into the uneasy relationship between art and race, raising questions about access for black collectors, and dissecting what critics and consumers mean when they use the term, ‘black art.’

Female bodies are used to great effect in her collage work, which often juxtapose commercial images of domesticity with stark reminders of the racism and sexism behind the visuals. Compelling examples include collages featuring the bodies of “mammy” figurines topped with movie starlet heads and Royal Doulton figurines newly crowned with heads from wig advertisements from vintage Ebony magazines.

Images of herself dressed in various costumes heavily embedded with cultural and socio-economic signifiers, dominate Gaignard’s photography, which is created in different sites and cities according to what best suits each carefully made point.

At her core, Gaignard is a shapeshifting artist who is most comfortable as a chameleon, reflecting humanity back to the viewer with a profoundly personal touch. This newest body of work stands as a testament to that, and as an invitation to take a closer look. 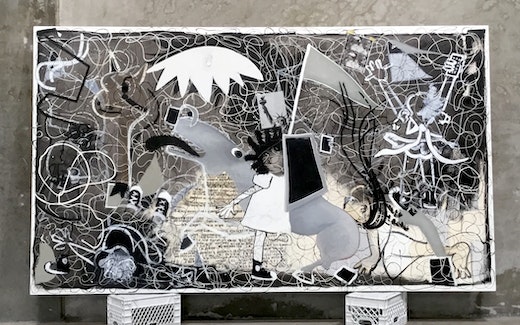