"The light touch is often the strongest gesture of all" - Helen Frankenthaler, 1962

Vielmetter Los Angeles is pleased to present The Light Touch, an exhibition featuring a selection of artists working across numerous modes of abstract painting. The exhibition uses Frankenthaler’s quote as an organizing principle–the artists, though varied in their approaches, share an interest in the play of light and spirit of pleasure through color and gesture.

Caitlin Lonegan’s paintings appear loose, with dense areas of expressive brushstrokes which spread out over the expanse of the canvas, and upon closer look reveal a dense layering of marks, sprays, and splashes which shift as the eye moves around the surface. Her use of metallic and iridescent paints adds further dynamism to the compositions–the paint glistens and flickers adding a temporal quality to the experience of looking and emphasizing the possibilities of various perspectival points within her paintings.

Monique Van Genderen similarly plays within a visual vocabulary that combines a multitude of gestures. Swipes, drips, and stains–rooted in modernist abstraction–are expanded into an experimental interplay of dense pigment and luminescence, creating a richly dense overall surface.

Yunhee Min’s new work is a departure from the vertically oriented paintings she is known for, in which broad strokes of color create rhythmic compositions built up like architecture. In Min’s latest body of work, there is a play between large swaths of color whose forms are amorphous and areas of improvisational marks and contrasting color. The play of different painting applications (swipes and marks) is anchored by a dominating color which acts as the backdrop to a complex dialogue.

Iva Gueorguieva’s painting Placenta is an equally enveloping combination of painted and torn fabric and paper, densely collaged to create an overall surface layered with texture, color, and frenetic energy. The collaged shapes and saturated areas of paint merge into a richly tactile experience.

Sarah Cain’s painting peacocking carefully balances restraint and release combining hotly hued colors with hard-edged composition and unconventional objects. An unadorned chain wraps around a painting’s perimeter intervening and creating a u-shape that determines the painting’s composition–brilliant laps of color are reined in by Cain’s slick geometric lines while the chain emphasizes the painting's objecthood and plays on the sexual undertones of the work.

Sadie Benning’s resin paintings are intensely hand-worked and carefully assembled compositions of wood and aqua-resin coated in layers of primer and casein-based paint. The combination of texture, material, and approach confuses the medium which can be read as drawing, painting, and sculpture, breaking down the historical barriers between these three modes of making.

Linda Besemer’s work Swoop Wavy Bulge is composed through an experimental process of manipulating the 3D animation program Maya to render geometric forms. At first glance, the works appear to be completely digital but upon closer looking, Besemer’s brushwork reveals the intensely handmade quality of her works. In this painting, Besemer has specifically manipulated a three-dimensional image of a grid to create an all-encompassing visual plane that teases and disorients the viewer with no clear focal point or sense of gravity.

Math Bass’s stylized diptych teeters on the edge of abstraction and figuration. Recognizable forms appear and yet turn abstract, becoming shapes rather than signifiers, like shadows manipulated by the sun. Repetition is used as a tool to foreground these forms as part of a visual lexicon Bass has been developing over the last several years as part of the Newz! series–where forms appear in a multitude of perspectives, suggesting the possibility of mutable meaning. Though graphic in the flatness of the forms, there is a lightness to Bass’s geometric abstraction–thin layers of opaque paint are delicately applied to the raw canvas.

The gallery is located at 1700 S Santa Fe Avenue, south of the 10 freeway. Parking is available on the north parking lot adjacent to the building. Gallery hours are Tuesday through Saturday from 10 am to 6 pm and by appointment. 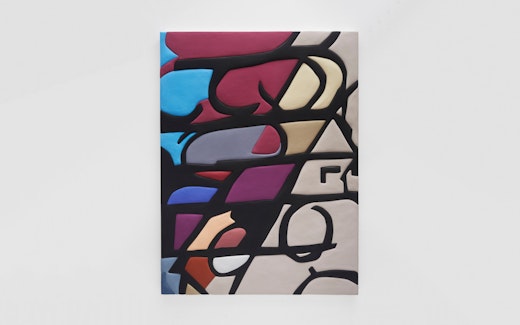