Susanne Vielmetter Los Angeles Projects is pleased to announce the opening of Nicole Eisenman’s solo exhibition, Dark Light, on March 17, 2018. The exhibition is the United States’ debut of the sculpture, drawings, and two monumental paintings that were featured in Eisenman’s 2017 solo exhibition at the Vienna Secession.

Dark Light expands this exhibition and will feature new works created specifically for presentation in Los Angeles. The sculpture, which also functions as a stage set, is called Monument to a Politician. Utilizing this set, Eisenman, along with Los Angeles-based artist Math Bass, will perform a reading of Bernadette Mayer's poem “To a Politician” during the opening reception on March 17.Eisenman’s paintings Dark Light and Going Down River on the USS J-Bone of an Ass present sinister scenes where the main action is either imminent, if as of yet unnoticed by those pictured, or occurring in the background, while the figures in the scene seem unperturbed. Both works have elements of classical history paintings - their scale and triangular compositions echo famous scenes of Liberty over Battlefields or George Washington crossing the Delaware.Dark Light centers on a man wearing a red baseball cap, camouflage t-shirt, and orange hunting pants. He stands on the bed of a pickup truck, a cloud of thick smoke billowing from a chromed pipe behind him, while three companions sleep at his feet. In his outstretched right arm he holds a flashlight, focusing a cone of dark light forward, oblivious to the thick column of viscous black liquid - possibly an allusion to crude oil—that pours from a massive pipeline or hole in the sky. The sun or moon just to the right of this toxic scenario is tiny by comparison.In Going Down River on the USS J-Bone of an Ass (2017) two boats - one red tugboat, one made of an enormous floating mandible with a ripped sail - are floating down an acid green river toward a precipitous drop where all will most certainly tumble down and drown. The stern of the “J-Bone” is occupied by a seated man playing a flute, the rigging is manned by a sailor in stripes and whites, and a red-faced business man in a suit (an echo of George Grosz’s bankers and businessmen, a type that makes cameos in many of Eisenman’s earlier works.) All present appear calm - a bass drummer stands atop the deck of the red boat, pounding a rhythm, stoically staring straight ahead as though the water isn’t about to fall.The references in these paintings – to “rolling coal,” a pastime in which diesel trucks are tricked out to emit massive plumes of black smoke into the faces of bicyclists, Prius drivers and the like, and to a fall precipitated by the unstoppable progress of an ass’ mouth—are fleshed out in a suite of drawings that offer the viewer unique insight into Eisenman’s process. In their various permutations and representations of the scenes pictured in the paintings, their underlying connotations oscillate between helpless outrage and despair and hysterical amusement, dissecting with razor sharp humor and pointed outrage the tragedy of our political reality.

Nicole Eisenman (b. 1965) was a 2015 recipient of the MacArthur Foundation “Genius Grant” and the winner of the 2013 Carnegie Prize. Recent solo exhibitions include “Now or Never,” Secession, Vienna, Austria; “Al-ugh-ories,” New Museum, New York; and “Dear Nemesis: Nicole Eisenman 1993 – 2013,” Contemporary Art Museum St. Louis, ICA Philadelphia, and the Museum of Contemporary Art, San Diego, CA. A suite of new sculptures, Sketch for a Fountain (2017), were prominently featured in the 2017 Münster Skulptur Projekt. Eisenman’s work has been included in numerous group exhibitions including the 2016 Biennale de Montreal; “American is Hard to See,” Whitney Museum of American Art; “Painting 2.0: Expression in the information Age,” Museum Brandhorst, Munich; “The Forever Now: Contemporary Painting in an Atemporal World,” Museum of Modern Art, New York; Manifesta 10, the State Hermitage Museum, St. Petersburg; the 2013 Carnegie International; and the 2012 Whitney Biennial. Nicole Eisenman lives and works in New York and has been represented by the gallery since 2005. This is their third solo exhibition at the gallery, following previous solo exhibitions in 2007 and 2011. 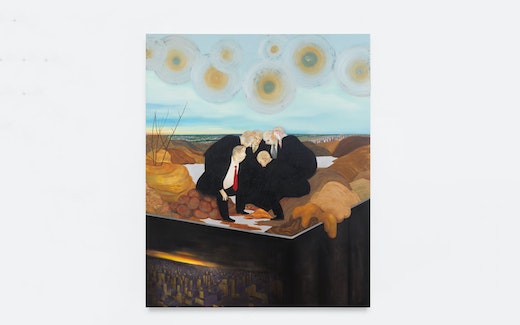