Her 2017 MASS MoCA solo exhibition, Archaeology of Another Possible Future, considered the contradictions of the contemporary American economy, where value is increasingly abstract and established through declarative acts divorced from material reality. In Emotional Capital, Glynn explores the intersections of material and affective realities as they play out in and on bodies within the context of increasingly polarized and irrational political and economic systems.

The exhibition is populated with a number of fragmentary bodies rendered in materials including cast bronze and ceramic. These bodies, formed in pieces or constructed as empty shells take the volume of garments, armor, and internal organs, and range in affect from abject to defiant. Their uncanny forms and proportions feel slightly estranged: the bronze sculptures are “Frankenstein-ed” together from life-casts of multiple models, while the ceramic forms are more roughly rendered by hand. Glynn uses color to push these figures away from the representational and toward the symbolic – what might be flesh is a mottled, industrial palette. As one enters the gallery, the torso of an androgynous figure hangs limply from the wall, their bald head down, long arms draping languidly toward the floor. The cast bronze of the sculpture is patinated in tones of red and green. It is unclear if the figure is human or humanoid, half the body is elsewhere. The suggestion is of a body that has been exploited, pushed to its limits and left behind in parts; or perhaps awaiting assembly, for some future use.

This shift in point of view, from the exploration of material histories to the evocation of embodied experience, is inflected by the concept of “cruel optimism,” a kind of toxic relationship between what one desires and one’s well-being. As articulated by Lauren Berlant in her 2011 book by the same name: “…cruel optimism exists when something you desire is actually an obstacle to your flourishing. It might involve food, or a kind of love; it might be a fantasy of the good life, or a political project.” She goes on to describe how the desire for (or belief that if one works hard enough, or if certain conditions are met, that one might achieve) a certain idea of the “20th century, post-war good life” often inhibits people from taking the actions necessary to protect their own best interests; to imagine another possible future. Similarly, actions that seem to be benign or even overwhelmingly positive, may have consequences that undermine the initial benefit experienced.

To this point, in the fraught context of contemporary politics, where the failures of the past are continually asserting themselves, often with pointed brutality of language and action, a larger-than-life-size Victorian suffragette costume, rendered in black t-shirts coated in resin cuts a defiant, if ambivalent figure. She is hollow, headless, without limbs: a powerful woman who cannot move, think, or speak. The sculpture, Unfinished Business, is a monument to a hard-won success, the 19thamendment, which granted white women the right to vote in national elections. It also speaks to the complexities of establishing women’s suffrage, the contemporary ramifications of who was left behind in the decades-long struggle for the vote, and the continued failure of the project (and subsequent women’s movements) to engender legal equality between the sexes. Formally, the garments that compose this free-standing dress collapse the 1890’s into the present, evoking the expansion of resistance and also the idea that for each accomplishment of history, the Hydra of systemic exploitation sprouts another head, further draining our energies and distracting us from action that could change the course of the future to favor those who have historically been exploited.

In her new work, Glynn seeks to formally and conceptually locate the spaces in which there is so much pressure that the center can no longer hold and the integrity of everything from experience to infrastructure begins to fail. In the studio, this manifested as process-based research into ways of making that mimicked the use of intense pressure and extreme heat -used, for example, in pipeline construction and fracking, to create forms that express both the physical effects of this pressure and the psychic conundrum that leads it to increase. Pressure is manifest everywhere in this work: large-scale prints made by driving a steam-roller over trash and yard waste coated in ink to create compositions dictated by the failure of these bodies under stress; ceramic sculptures evocative of pipelines, sewers, or intestines, made by extruding wet clay into tubular forms, a malleable material given form by intense compression. These visceral fragments move the viewer from the visible to the invisible, the exterior of the body to the buried pipes and cables that convey the conveniences of modern life: water, gas, and even high-speed internet.

The gallery is located at 1700 S Santa Fe Avenue, south of the 10 freeway. Parking is available on the south parking lot adjacent to the building. Ridesharing is encouraged. Gallery hours are Tuesday through Saturday from 10 am to 6 pm and by appointment. 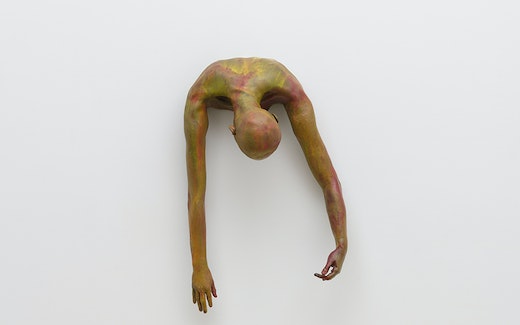 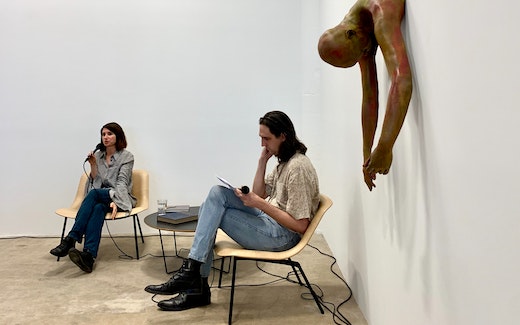