Genevieve Gaignard: I'm Sorry I Never Told
You That You're Beautiful

Vielmetter Los Angeles is pleased to announce our first solo exhibition of new works by Los Angeles based artist Genevieve Gaignard, I’m Sorry I Never Told You That You’re Beautiful. Known for her exploration of Americana via racial formation, interiority and portraiture, Gaignard disrupts symbols and images, which attempt to assure supremacy and erase merging identities and notions of belonging. This exhibition explores affinity of place, desires of flight/departure, and an empathic turn through installation, collage, sculpture, and photography.

In her recent bodies of work, Gaignard has used the site of homeplace and emblems of domesticity to explore American racial logic, beauty, and desire. Her architectural installations situate black and white subjectivity as acts of adornment entangled with historical tropes and present circumstance. Images cut from Ebony, Life, and Jet magazine populate wallpaper and appear alongside vintage furniture and sundries of new and old. These moments of interiority and familial space carve in and out of each other, prying apart racial strata and hegemony. In particular, black womxnhood and femininity are used as signifiers which mark the spectrum (in hue and body type) of representation via self-portraits. These stylized photographs present a myriad of identities as Gaignard appears in distinct wigs, costumes, and amongst varied domestic backdrops. Gaignard’s characters are constructed through ideals externally imposed and those self-fashioned. Gaignard’s scenes pivot the bifurcation of black/white, interior/exterior, aspiration/possession as sites of play that are as much things of history as they are expressions of current realities.

For I’m Sorry I Never Told You That You’re Beautiful Gaignard presents a domestic space of pleasure and affirmation while attending to the possibility of tumult and atonement. Gaignard’s signature wallpaper, porcelain figurines, and kitsch objects adorn her installation, presenting the amalgamation of things both of blackness and beauty enmeshed with (white) Americana textile patterns, advertisements, and ephemera. Mirrors and reflective surfaces merge viewers within discrete moments of Gaignard's objects and Gaignard herself, as her grid of portraits is an opportunity to behold and echo back onto the one gazing. The ask here is neither the solidity in difference–racially, gender-wise, or in homeplace–but rather the construction of such a precarious thing in the first place wherein both love and apology sit alongside the other as a means toward reconciliation.

The gallery is located at 1700 S Santa Fe Avenue, south of the 10 freeway. Parking is available on the north parking lot adjacent to the building. Gallery hours are Tuesday through Saturday from 10 am to 6 pm and by appointment. 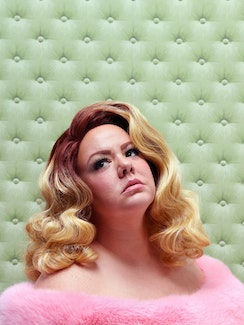