Nick Aguayo: Wake the Town and Tell the People

Vielmetter Los Angeles is pleased to present our second solo exhibition with Los Angeles based painter Nick Aguayo, Wake the Town and Tell the People. In this new body of work, Aguayo presents a series of paintings whose style is evidently rooted in the process of collage – thick impasto surfaces and textural areas of built up and removed paint reveal layers of the compositions which appear both highly orchestrated and invigoratingly improvised.

Various shapes recur throughout the compositions, like a cast of characters in a sequence of vignettes which both function as autonomous objects and when seen together suggest a greater constellation of ideas. The shapes (sawtooth, halfmoon, dots, rectangles) appear in both positive and negative forms and their geometry is rendered more human-like via their organic, irregular edges.

In some of the works elements beyond paint are incorporated (fabric, cannibalized paintings, etc) and further articulate the collage sensibility of Aguayo’s style and refer back to his previous collage-based practice. Marble dust is mixed into the paint, creating a matte finish and specific physicality adding a sense of depth and blurring the visual difference between painted shapes and collaged elements.

The gallery is located at 1700 S Santa Fe Avenue, south of the 10 freeway. Parking is available on the north parking lot adjacent to the building. Gallery hours are Tuesday through Saturday from 10 am –to 6 pm and by appointment. 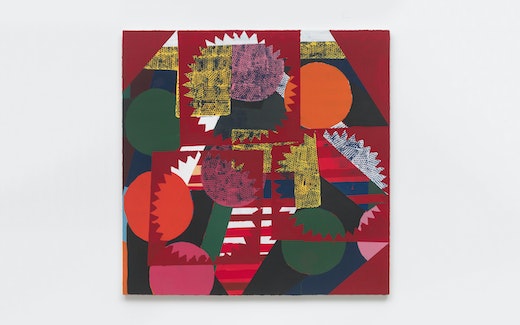