Vielmetter Los Angeles is thrilled to present our second solo exhibition with Los Angeles-based artist, Paul Mpagi Sepuya, Daylight Studio / Dark Room Studio. Using natural light or red “safelights” and props, Sepuya creates playful references to European and North American 19th century daylight studios and to the dark room – here referenced with a double-entendre as both the space where film is processed and printed and those dark rooms in which other forms of exposure and revelation occur.

In 2021 Sepuya moved into a new, larger studio which allowed the elements of his shooting space to come together in a new configuration. While researching photographs of 19th and early 20th century daylight photo studios, he also accumulated a mix of 19th century and contemporary props and furniture in the daylight studio that playfully reference these iconic sites of early portrait photography— Asian woven rugs, large velvet cushions, European pedestals and chairs, African stools and fans, and gardening implements. Shooting in this mise-en-scène, Sepuya explores different positions that queer, racialized bodies occupy within the intimate dynamics staged by studio spaces where friends oscillate between subjects of portraiture and stylized model studies. He himself takes up the position of the photographer behind the camera, the invisible laborer who maintains the space, and and even a model a la Alexandre Skeet, an artist in his own right who was photographed by European American F. Holland Day. By drawing out these associations and modes of relation, Sepuya entangles the pleasure of exhibitionism and leisure with histories of labor and objectification that can be glimpsed within the archive.

The studio has always been a protagonist in Sepuya’s photographs. Reflected back to the camera via one of several mirrors in the space, the studio is delineated as a private site in which camera, objects, and people interact. When figures are present, no matter how intimate the scenario, they are protected from the viewer’s intrusion and even the objectification of their gaze by the clear boundary of the mirror’s surface; the photograph indexes a reflection on a surface rather than bodies, space, and other objects. In the Daylight Studio photographs, the enclosure provided by the mirror also acts as a foil to that older mode of image creation, epitomized by the work of Holland Day, where the photographer was often engaged in creating imaginary epistemes for racialized and gendered types that would be used to craft public narratives; defining how people see and are seen. In Sepuya’s studio, models are friends and their interactions, poses, and presentation in front of the mirror are self-determined, rather than directed by the artist toward a specific end; the studio is a private stage on which subjects are encouraged to locate the pleasure of playing with self-presentation.

In contrast to the reflective and symbolic nature of the Daylight Studio works, Sepuya’s Dark Room Studio photographs emphasize the unique formal and technical elements of shooting photographs in low light. Illuminated only by red safety lamps, many of the Dark Room Studio photographs are petite dye-sublimation prints on aluminum, showing bodies in the studio over an exposure time of several seconds, their interactions captured as distortion in the images. While aluminum dye-sublimation prints are decidedly a modern, often industrial, print material, these works have an incredible internal luminosity and compellingly smooth surfaces reminiscent of historical photographic printing processes on metal and glass.

Moving from daylight to night and back, the works in this exhibition suggest a multiplicity of potentials in revisiting historic photographs — what may not have been recorded on plates, negatives and prints — and the possibilities of engaging with these historicized sites for creating complex representations and associations in our contemporary moment. 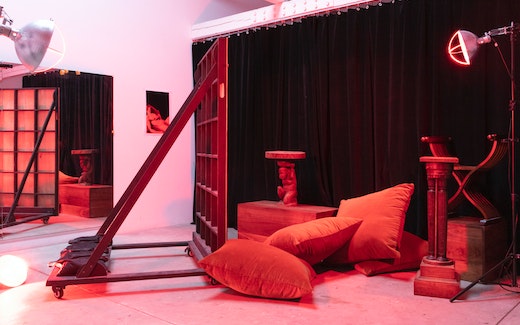